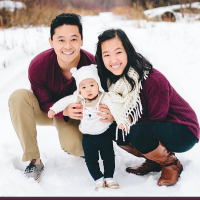 Justin is studying Physiology and Developmental Biology and preparing to enter Medical School. He will graduate from BYU in April of 2018. He chose to come to BYU because it is academically rigorous and also "embodies many principles and morals that I already have personally committed to live." Justin believes that a good education incorporates both knowledge and personal development. He first got involved with the CREATE project as a student, and after he finished the class, was hired as a Research assistant. When asked about the project, Justin said, "I honestly feel an incredible amount of respect and appreciation to the thousands of couples who have participated in this study, and I hope they all understand the huge impact they will have to strengthen current and future families in an increasingly confusing and turbulent society." Justin hopes to use the things he learned at CREATE to help him have a "multi-faceted approach" to being a doctor, allowing him to interact with patients as if they were his family. In five years, he sees himself even closer on the path to becoming a great doctor.