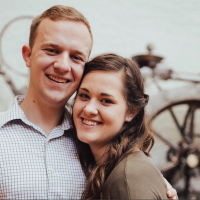 Kaylin is currently studying Psychology at BYU with a minor in Family Life. Kaylin will graduate in the Spring of 2018. Kaylin came to BYU because it had a very uplifting environment and a reputable education system. Kaylin was originally a student volunteer on the project who progressed so that she was hired to work on the project. She said she loves the CREATE project because it "aims to help us understand why marriages in the United States and the research is relevant to today’s society." CREATE has encouraged her love for research and analyzing data. The most important thing she feels she has learned from the CREATE project is that couples from all over the United States still believe in their marriages. "They still believe that being married makes their lives happier and better than it would if they were alone." For Kaylin, working at the CREATE project is a springboard for her career. Kaylin plans on attending graduate school where she will have the opportunity to do similar research. Kaylin loves to read, play the piano, and paint. Her love for reading and playing the piano came from her childhood and have been hobbies that she has carried with her for a long time. She also loves to paint and express herself through many mediums of art. Within BYU’s campus she has enjoyed attending drama plays and musical performances. "My greatest accomplishment is my relationship with my family and with my husband." Kaylin strongly believes families and their success are super important. When asked who she would like to meet from history she said, "I would love to meet one the founding female members of Psychology, like Rosalie Rayner. We get a lot of information about the male perspective, but this is a woman who worked on the Little Albert Experiment!"